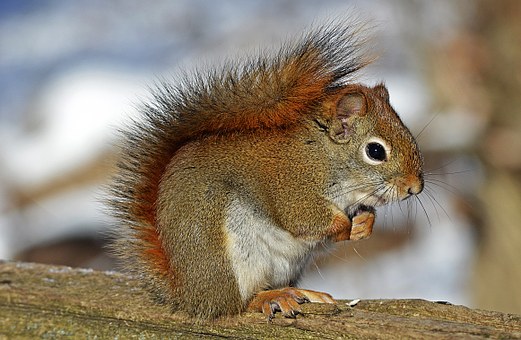 Stan Boutin, a biological scientist at the University of Alberta has been researching red squirrels in the Yukon for more than thirty-five years. In the course of his work on the Kluane Red Squirrel Project he has documented a phenomenon important to the evolution of the red squirrel and instructive for humanity. When it comes time for adolescent red squirrels to strike out on their own, the more successful ones prove to be the ones who inherited a food cache from their ancestors. And the aging squirrels are more than happy to oblige, leaving a treasure for future generations they will never meet.

Middle-aged squirrels, usually male, work tirelessly to gather food supplies and hide them – literally, squirreling them away – before they die. These food stashes containing on average twenty thousand pinecones have allowed the younger squirrels that benefit from the legacy to allot more time and energy to procreation. Thirteen different squirrels used one particular supply over thirty-one years. The squirrels that inherit these food stores, notes Boutin, have fifty percent more offspring than squirrels who have no inheritance.

It seems that the key to a successful red squirrel community is the willingness of one generation to provide for the next and the cleverness of the new generation to rely on the efforts of the past. But human beings need to take squirrel behavior one-step further. The Talmud (Ta’anit 23a) tells the story of Honi who observes an old man planting a carob tree. It takes seventy years for a carob tree to bear fruit and odds are the old man will never enjoy the fruits of his labor. So Honi asks him why he bothers. The old man is said to have replied: “Just as my ancestors planted for me, I plant for my children.” Enjoying inherited legacies is wonderful, but insufficient. One must leave a legacy too. In his satire The Conversion of Chaplain Cohen author Herbert Tarr concludes the family farewell as the young man goes off to the army with the observation: “A parent’s love isn’t to be paid back; it can only be passed on.”

For Jews, there is no more appropriate moment to reflect on legacies than at Yizkor. But gratefully recalling the legacy left to us by parents and grandparents and more distant ancestors – while noble – is inadequate. As Jews we must think about what we will lovingly pass on to our children. What we provide the next generation and the generations beyond is crucial to their success and to the future of the Jewish community. Yizkor is – or should be – just as much a pledge for the future as it is a tribute to the past.